5 Ways to Entertain a Baby (and 1 for Grown-Ups)

As a former Camp Galileo camp director, headquarters team member, and overall Galileo forever-fan, I was so excited to learn about Camp Galileo Anywhere. So excited, in fact, that I signed up to receive weekly Camp Galileo Anywhere curriculum emails, even though I knew that my kiddo, Ezra—who just turned one—would be too young for the Pre-K – 5th grader-geared content.

So what if you’re home with an extra little little as well? These are some things that I’ve learned and that have worked for us from this first week of sheltering in place.

Full disclosure: I am not an early childhood expert. I’m just a first-time mom doing my best in this new and sudden reality, trying to draw on my experience with slightly older kids and really lean into the Innovator’s Mindset.

Stick to as much of a routine as you can manage.

I know, easier said than done right now. Children—and babies and toddlers—enjoy the safety and comfort of a routine. Whatever routine they had has likely been partially to totally upended, so any regularity you can manage will be comforting for them (and likely for you too).

Pick your battles—or better yet, prevent them.

We used to have all of Ezra’s books on low shelves in his room. We also have all of my husband’s comic books on similar low shelves in the living room. Ezra used to love to take all his books off of his shelves. He also wanted to take all of daddy’s comic books off the shelves, which he’s not allowed to do and we had to actively stop him from doing often.

When we suddenly became stay-at-home parents, I thought, “Ugh, I do not want to have that battle daily.” I thought about packing up the comic books for the time being, but then I had another idea. I moved all of Ezra’s books into stacks in front of the comic book shelves in the living room. We’re in the living room for most of the day, so Ezra has been way more into exploring books on his own this past week than ever before, and it has kept him away from the comic books because something he likes more—his own books—are right in his field of view. Win-Win.

Ask yourself: what daily battles can you redesign your space or routine to avoid?

EVERYTHING (except the unsafe things) in your home is a toy.

Look around your home and try to see everyday objects with fresh eyes. Ezra and I spent a good 20 minutes exploring a salad spinner the other day. If you didn’t know automatically what a salad spinner was for, it would be a magical object! First, I let him pull it apart and play with the pieces on his own. Then I put them back together and showed him how to spin the top and let him try it out himself. Then we took the lid off and I spun the handle so he could see the spinning mechanism in motion from that perspective. Then we put blocks in the salad spinner and spun those. The french press, a light switch, my sewing machine presser foot, and even a box of his old clothes have all proved similarly fascinating.

You probably already have a space with baby toys laid out where they have free reign. I also highly recommend a lower cabinet or two that are totally baby-safe and unlocked. Ezra has full access to the tupperware cabinet and the pots and pans cabinets and he knows he can always play there. He has pulled everything out of those cabinets So. Many. Times, but he is delighted by it time and time again. When I see him headed for the tupperware I’m like, “Yessss baby—go for it!” That’s easily 10 – 15 minutes of self-directed play every time, and it only takes us a few minutes to put things back in—fair trade.

Do your own thing, but do it on the floor.

My husband and I have realized that as long as we’re on the floor, Ezra is happier and more willing to play on his own for a bit. As a result, adult conversations, email responding, and even conference calling have all moved down to the ground. My guess is that when we’re sitting at tables or desks, Ezra feels excluded and wants to know what we’re up to. When we’re on the floor he can come check it out, say hi when he needs a little love, and orbit around us for the most part.

Keep a sense of humor.

We’ve read all of Ezra’s books so many times we have most of them memorized. This is not an exaggeration. I know this because one night after Ezra was in bed, my husband and I sat on the floor (because we’re floor dwellers now), drank some wine, and quizzed each other on reciting baby books. We also like to compete to see who can quickly build the tallest block tower while Ezra is distracted before he notices and crawls over to knock it down. You’ve got to keep yourself amused somehow.

Looking for more ideas? We’ve tried lots of more specific things, from repurposing toilet paper tubes to playing with our food. You can check out some of the biggest wins here.

Santina Rohner-Moran is a former Galileo camp director and mom to a one-year-old. When she’s not wrangling the little man, Santina likes to sew and read anything other than board books. 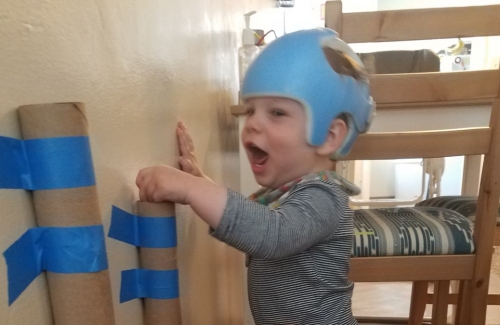 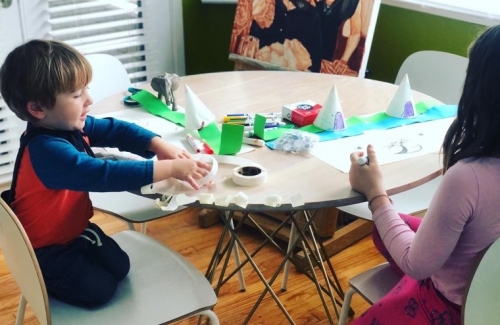